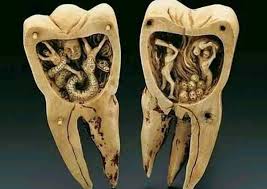 Have you ever wonder how the ancient civilization dealt with tooth problems or what tooth problems did they encountered? Believe it or not cavity exists since the old days. There were myths on why people had cavities and one of them are the tooth worms.

Cavity should had been a common problem for the ancient times since they were all lacking proper hygiene and enough knowledge to keep it healthy.

Tooth worms were widely believe in the world as a cause of decay since it was written in different scripts like the Sumerian and the Chinese script. But does worms inside our tooth realistic?

The myth of tooth worms causing decays had been debunked with our progressing technology in the dentistry.

Cavity is the result of plaques that have been sticking on the teeth for a period of time. The remains of food that contain sugar and starch will form acids that will destroy the enamel as well as the whole tooth.

The only thing we should be afraid of is not the tooth worm but the mindset of always cleaning our teeth.